The pageantry may be over, but the UK’s bumper Brexit week has only just begun.

After making Queen Elizabeth quite literally hoof it over to the Houses of Parliament and read out his plans for the forthcoming legislative session, Boris Johnson needs to get back to the real task in hand — getting a Brexit deal.
Such a pivot would not ordinarily be required on the day of a Queen’s Speech. Normally, the event heralds the start of a parliamentary term, setting forth a year’s worth of important legislation that will shape the future of the country. But Johnson leads a minority government that’s at least 40 shorts vote of winning anything in Parliament, and soon enough there will need to be an election to break the logjam.
The point of Johnson’s Queen’s Speech wasn’t to kick off a program of governing, but to tease Brexit-weary voters and show them what life might be like after Brexit, if only the Prime Minister had a majority to get on with it.
The expensive jamboree otherwise known as the State Opening of Parliament might have looked important, but in reality it was little more than a campaign ad with a fancy crown and a lot of diamonds.
Brexit, of course, featured heavily in Johnson’s agenda as expressed by Her Majesty. But it was also a pitch to voters at home, giving them a glimpse at what life could be like after leaving the EU. More money for hospitals, schools and police. Making the UK one of the greenest, cleanest and safest places to live by investing in environmental and security policy.
All of which sounded great. But as the Prime Minister well knows, it’s not got much chance of happening any time soon. And it won’t have much chance of happening at all, if Johnson can’t get Brexit sorted.
At the end of last week, Johnson’s supporters were in high spirits, as the EU indicated that it was willing to listen to his ideas for a new Brexit deal. Johnson had put forward proposals that are, in essence very similar to those negotiated by his predecessor Theresa May, except with an apparently more complex customs mechanism for Northern Ireland that would replace the Irish “backstop,” the stumbling block to getting a deal passed by the UK Parliament
By Monday however, the mood music had darkened. After delving into the details, EU officials seemed a lot less optimistic than the Irish Prime Minister Leo Varadkar on Friday. After accompanying Johnson on a wander in the woods at a wedding venue in northwest England, Varadkar declared he could see a “pathway to a deal” amidst the Brexit thicket. But on Monday, German chancellor Angela Merkel was talking of Britain as a future competitor in global markets.
Here’s what you need to know about the Queen’s Speech 02:05
Still, Johnson believes he can push a deal through. In the Prime Minister’s fantasy world, the coming days go something like this.
Tuesday: Parliament debates his Queen’s Speech while negotiations in Brussels reach a crunch point. Wednesday: Brussels announces it’s ready to strike a deal based on Johnson’s plan ahead of the EU Council summit on Thursday. On Thursday, Johnson travels to Brussels and blows away his fellow EU leaders, convincing them all to agree to that his plan is a good one and that it works for the whole of Europe. On Friday, he returns to London while his allies whip up support for his deal. Then, on Saturday, in a special sitting, Parliament approves his deal and Johnson emerges the hero of the hour, having pulled off a feat once thought impossible. 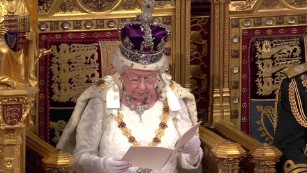 Basking in the Brexit glory, Johnson would then be free to call a general election and put his agenda for the nation to the people who matter: The voters.
You’ve probably spotted how this might all go wrong. At every stage, Johnson needs to clear a fence with spikes on top that’s been set on fire by both his enemies and even those who supposed to be his allies.
Conservative Brexiteers, the Northern Irish unionists that are meant to support him, the official opposition Labour party in London and EU officials who have been briefing against him from day one, could separately or collectively scupper his plan at any stage.
And each time Johnson fails to clear a fence, his authority at home is eroded a little further. Monday’s Queen’s Speech will have been more about optics than anything else. Johnson needs to look like a man who is fighting to get Brexit done and has a plan for what to do next. Whether he gets to do any of that or not is, at this point, not really up to him.
Tags
The Queen just read out Boris Johnson's stump speech
Share
Facebook Twitter Google+ LinkedIn WhatsApp Telegram Share via Email Print

Kurdish forces backed by US strike deal with Syria's Assad, in major shift in 8-year war