“The more they beat us, the less we believe the official results.”

Those were the words of one protestor who took to the streets after election results were announced in Belarus. Long-standing President Alexander Lukashenko has claimed a sixth term and 80 percent of the vote. But thousands of protestors have taken to the streets because they don’t buy it.

The co-founder of the Belarus Free Theatre who also serves as a lobbyist for democracy in her homeland tells Fox News these opposition activists won’t go home anytime soon.

“They are ready to go and protect their stolen voices,” Nadia Kaliada said.

She is referring to reports of voter fraud. It is not the first time in Belarus. But this election cycle feels different, many say. Video on social media is circulating that shows a woman climbing out a window and down a ladder with what appears to be a bag of ballots. She supposedly worked at a polling station. Brazen supporters of the opposition went around in the weeks leading up to the poll wielding slippers — to symbolically squash the cockroach character from a fairytale — that detractors associate with the current president.

Reports are at least 3,000 have been detained in protests, dozens have been injured and one may even have been killed when rammed by a security services vehicle. The government denies anyone has died. Tear gas, water cannons, flash grenades and truncheons have been deployed.

But the crowds tangling with heavily protected riot police appear to have little fear. Natalia Kaliada said there has been a run on sporting goods shops where protestors are looking for some minimal protection.

A stagnant economy, closed political system and the repression of dissent are what Belarussians want to see changed. Many have said it is time finally to turn a page in their history after 26 years of Lukashenko’s rule. Two popular figures who hoped to run against him, Sergei Tikhanovsky and Viktor Barbariko, were put in jail. A third disqualified candidate Valery Tsepkalo fled the country with his children after he said he’d received threats they’d be put in an orphanage.

Tikhanovsky’s wife stepped into his place and with Tsepkalo’s wife and Barbariko’s campaign manager, formed an unlikely troika of women in a country long run by a strongman who was head of a collective farm in Soviet times.

The women’s rallies drew large and emotional crowds, the biggest since the collapse of the Soviet Union. Svetlana Tikhanovskaya, the one whose name was actually on the ballot, is a 37-year-old stay home mother who trained as an English teacher but has said she’d rather be homemaking. She said, if elected, her plan was to then allow for truly fair elections, so she could pass the torch on. She has not recognized the results of the election. One unofficial exit poll showed results to be exactly the opposite of the official announcement.

Luksashenko’s handling of the coronavirus pandemic may have been a tipping point. Long in denial that it was circulating, he originally described the situation as “psychosis” instead of pandemic and he was widely mocked for that. Someone printed “Psycho 3%” T-shirts, a nod to that and what one private poll claims is the President’s real support numbers. The store selling the shirts was shut down.

But for many, there is nothing to laugh about. Kseniya Milya, 26, lost her father to the virus.

“Of course he didn’t believe (in coronavirus). He always believed our president, he always supported him and believed everything he said. The same was with coronavirus. We were among the first wave. Back then the statements of the president were absurd. Denying and blaming people for getting sick. Back then, he said that the cure is riding tractor, shot of vodka, and sauna,” Milya said.

The European Union has issued a statement condemning “disproportionate and unacceptable state violence against peaceful protestors.”  Natalia Kaliada has called on the West to do more. 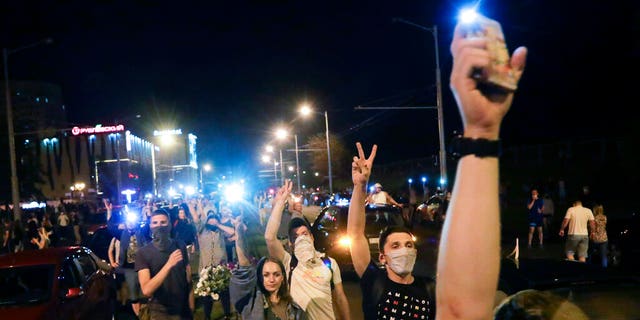