Not the catch this fisherman likely had in mind.

Angler Trent de With was fishing in Northern Territory, Australia, last Monday when he hooked a giant crocodile instead.

In video of the alarming incident, which was posted on Rod and Rifle Tackleworld Katherine last week and has been shared more than 11K times, de With can be seen reeling in his lure to find a crocodile attached and refusing to let go.

“Anyone want to get that back for me?” the man can be heard joking in the footage.

The nearly two and a half minute clip ends with him struggling to get back his line from the crocodile, which he eventually manages.

“Destroyed man, that’s the best,” another member of the fishing excursion can be heard saying, referring to the damaged lure.

“Here we were just trolling along with a classic 200 and this fella decides he wants to have a crack at it. Managed to get the lure back! Although it doesn’t track as straight as it use to,” de With captioned the popular video.

Though de With did seem pleased with the difficult struggle with the crocodile, he told Daily Mail Australia that hooking the reptiles is not uncommon in the area.

“You can accidentally hook them, this one seemed like he actually tried to eat it,” he said to the outlet.

“You just fight it till the line breaks or the hooks let go. That rod and reel are good quality stuff, which makes all the difference especially when you hook a big barra you don’t won’t your gear to fail.” 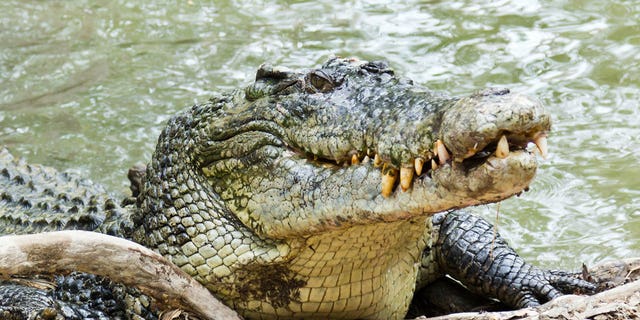 The crocodile just did not want to let go to the lure.  (iStock)

Those who viewed the video were specifically impressed with his tools, noting how strong they appeared to be while he was dueling with the crocodile.

“What rod and reel is he using?” one asked.

“What rod is that … I want one,” another wrote.

“Dude what combo is that???? I think I may need to add that to my collection,” another commented.

Noting unbelievable catches, a fisherman in Tennessee also reeled in the unexpected.

The Tennessee Wildlife Resources Agency recently shared the story on Facebook, warning followers to “be careful when you reach your hand in a fish’s mouth.” The warning came after a local angler inspected his catch, only to find that snake eaten by the fish staring back at him through the fish’s mouth.

More than $17.8 million awarded to Michigan Department of Labor and Economic Opportunity to connect Michiganders to Opportunity

Can’t visit the dentist? Here’s how to take better care of your teeth