DEARBORN — A new report on the state of the car insurance industry in 2020 finds that the cost of car insurance in Dearborn is one of the highest in the nation, just behind neighboring Detroit.

Drivers in Dearborn spend an average of $3,511 on their auto policies, coming in second in the nation behind Detroit, where drivers pay an average of $3,882. Southfield is number four in the country with an $3,366 annual cost and Dearborn Heights is number 10 at $3,152.

The report, “Insuring the American Driver: Trends in Cost and Coverage”, is compiled by the data researchers at Insurify. The report analyzed 25.5 million car insurance quotes to take a closer look at the elements driving pricing trends in 2020, recap major events in the auto insurance landscape this year and predict car insurance costs in 2021.

The report also covers information on insurers’ pandemic response, the unexpected costs of canceling coverage due to COVID-19 and racial disparities in quoting. It finds that factors that contribute to the soaring policy costs in U.S. cities include population density, weather patterns, crime rates and state driving laws. 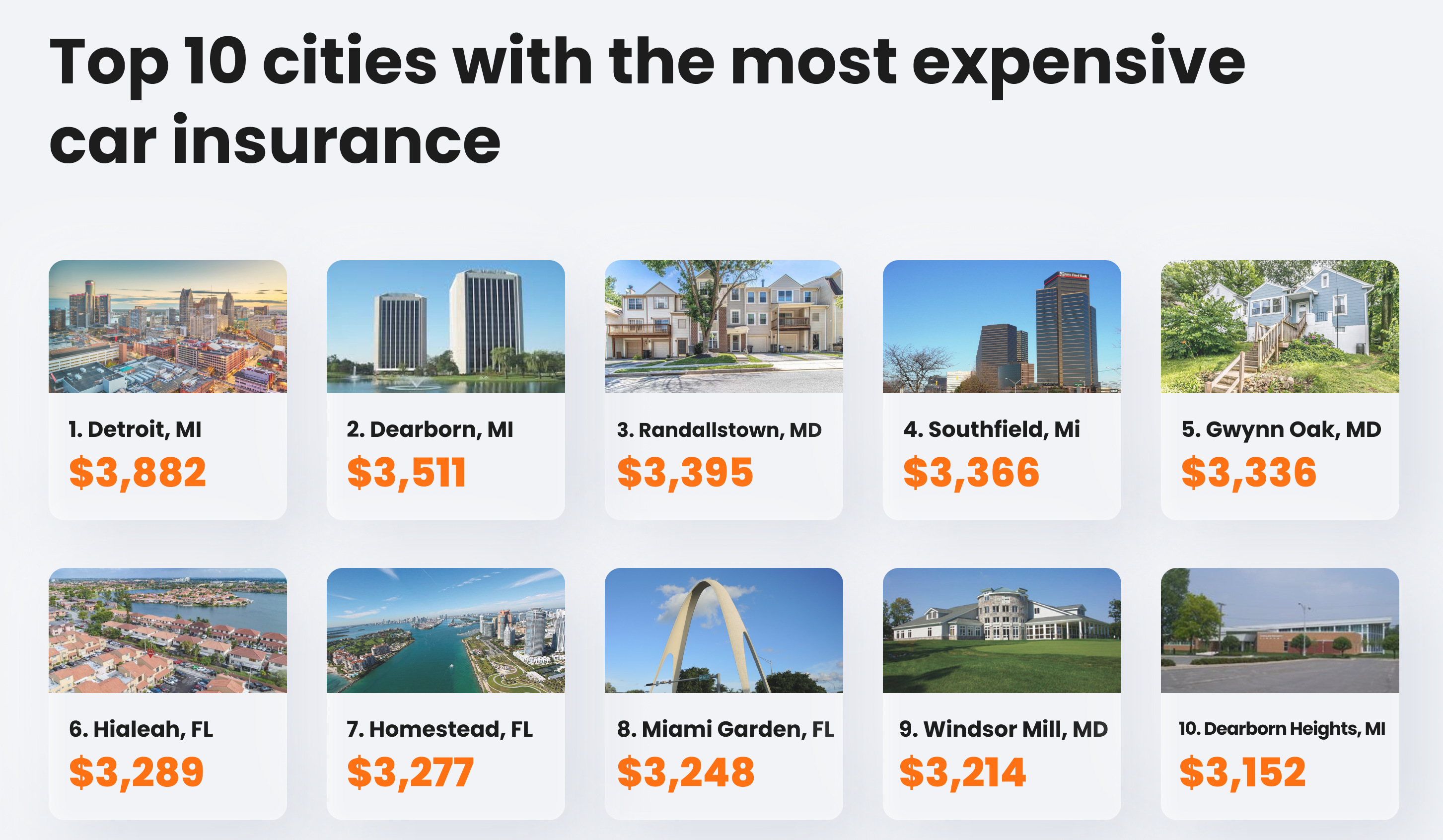 “While the report did not cover the factors driving up car insurance rates in Dearborn specifically, we can assume that the combination of Michigan’s general auto insurance landscape (especially prior to July 2, 2020, when the state legislature passed auto insurance reform to drive down rates) and certain demographic qualities of Dearborn led the city to have significantly expensive policy rates,” Kacie Saxer-Taulbee and Emily Leff of the Insurify data team told The Arab American News. “Many of the rates analyzed in the report come from before July 2020, when insurance companies were banned from using personal factors (such as age, homeownership status, occupation, education level and credit score) to determine rates in Michigan.”

Saxer-Taulbee and Leff said Dearborn has a comparatively young population — according to the U.S. Census Bureau, the median age in Dearborn is 32.4 years, compared to the national average of 37. While Dearborn is not a big city like Chicago or LA, it does still have a relatively high population density compared to the rest of the nation with 3,862 people per square mile (the average for a U.S. city is 1,593.5).

Insurify’s report found that both young drivers and city dwellers (where the population distribution is denser) tend to pay more for car insurance. These demographic characteristics, coupled with and exacerbated by Michigan’s auto insurance landscape, are likely what has made auto insurance in Dearborn so pricey.

“In recent history, Michigan has been unrivaled in its position as the most expensive state for auto insurance nationwide,” the Insurify team said. “Though a variety of policies contributed to this status, the fact that each driver was required to carry unlimited Personal Injury Protection (PIP) coverage was generally regarded as the largest culprit. As of July 2, 2020, this regulation is no longer in place, and rates are expected to drop statewide. Insurify’s American Driver report analysis includes policies that predate this change, so perhaps next year, Michigan will finally fall from its first place ranking.”

However, while premiums will decrease for the average driver, not all car owners will be so lucky. Now that PIP coverage is optional, many policyholders will opt out, meaning that those who continue to purchase this protection may pay more even for lower coverage levels.

In addition, newly-implemented legislation also eliminates insurers’ ability to price policies based on personal characteristics such as sex, credit score or marital status. Therefore, quotes will be influenced more strongly by personal driving records, and less-than-stellar drivers can expect to increase their spending.

The top factors that determine car insurance rates in any city are:

For the U.S. average, the report says that out of 227+ million licensed U.S. drivers, 87 percent are insured, and that the average U.S. driver will pay $1,463 in auto insurance this year.

There are other U.S. averages that may be of note. The reports finds that on average, women pay less than men for car insurance. In fact, the average policy price for a female driver is 4 percent less than that of a male driver.

Owning a home can reduce the price of a premium significantly. On average, unmarried homeowners pay the least for their car insurance, 15 percent less than unmarried renters and 21 percent less than married ones. Bundling car and home insurance can lead to savings of up to $123 a year.

The average monthly cost of car insurance is up 1.5 percent from last year. Not surprisingly, drivers in urban areas pay $129 more a year. Cities and towns with majority Black residents experience some of the highest quote prices in the country compared to cities of any other racial makeup, regardless of how clean those residents’ driving records are.

Earlier this month, U.S. Rep. Rashida Tlaib (D-Detroit) and other members of Congress introduced the Preventing Auto Insurance Discrimination (PAID) Study Act, which requires the U.S. Government Accountability Office (GAO) to conduct a study on the disparate impacts of automobile insurance companies’ use of socioeconomic, non-driving factors in premium setting and underwriting decisions.

“Auto insurance discrimination on the basis of non-driving factors has allowed auto insurers to reap benefits off the financial struggles of so many Americans for far too long,”  Tlaib said. “Now, we have a pandemic exponentially exacerbating those financial struggles, with folks being forced to choose between paying for state-mandated auto insurance, keeping a roof over their heads or food on the table through no fault of their own.”

Unless the risk numbers stay low and insurance providers keep prices low, insurance costs are expected to rise 6 percent in 2021.

Remember to get your flu shot this year!

The Funeral Service of the late Ahmad Amin Melhem in Dearborn