This man certainly “saddled up” to make the best of his two-week quarantine.

David Marriott, an art director from Sydney, Australia, thought he might take up juggling and spend his quarantine listening to music. Instead, he ended up turning himself into a “paper cowboy” using brown paper bags to make a costume — and a paper horse named Russell.

Marriott had traveled to the U.K. after his father died unexpectedly in February from COVID-19, The Guardian reported.

After quarantining in the U.K. before the funeral, Marriott expected another “long two weeks” on his way back into Australia, so he bought himself a portable speaker and juggling balls, he told The Guardian.

However, just three days into his quarantine in a hotel in Brisbane, Australia, he found inspiration from his lunch — at least, the brown paper bowl holding his lunch. 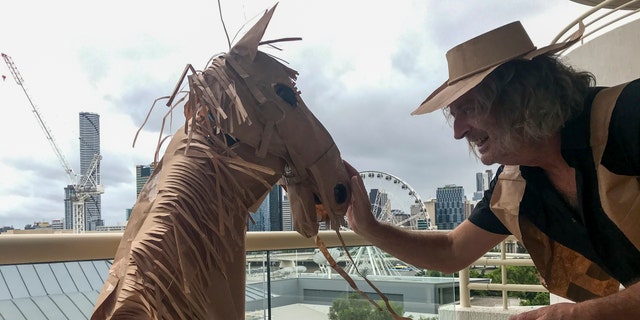 “I thought, that’s a hat, if I add some brim to it,” Marriott told The Guardian. “That was the beginning of the cowboy, and the vest and the chaps came naturally.”

Marriott made the rest of his costume out of the brown paper bags that his meals were delivered in, according to the newspaper.

Once his costume was done, Marriott told Australia’s ABC Radio Brisbane that he realized he needed friends. 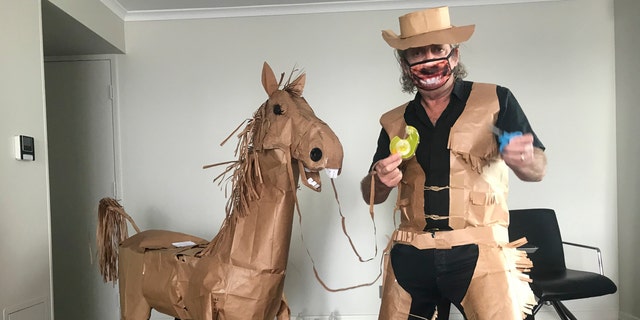 “I found in my cupboard an ironing board and I dragged it out and put a desk lamp on it and I thought, ‘My God, there we go — there’s the skeleton of a horse,’” Marriott told the station.

According to the Associated Press, Marriott named the horse Russell and used coffee pods for his eyes and nostrils. 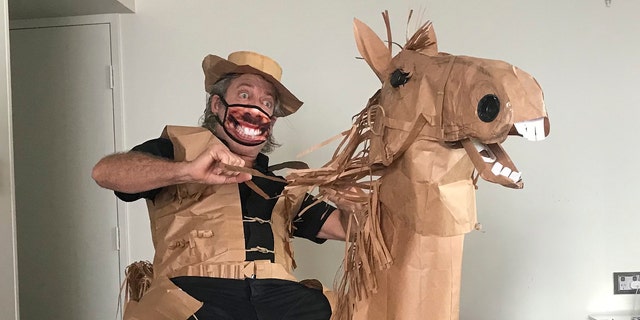 Marriott told AP that Russell has been something of a sounding board during his quarantine. “It’s an existential conversation, quite philosophical,” he told the outlet. “Like, why are we here? What are we doing?”

Marriott also created his own nemesis, the Clingfilm Kid, with a costume made out of plastic bags. Marriott even went on to make a nemesis for his cowboy, the Clingfilm Kid. (David Marriott via AP)

“Every cowboy needs a nemesis, so I figured, one is all-natural and recyclable and the other one is the nasty plastic single-use guy — he’s the baddie … he’s gonna get shot … there’s a narrative going,” Marriott told ABC Radio.

Marriott’s antics with Russell have certainly cheered people up, including hotel staff and other quarantining guests.

He’s even introduced his mom and sister to Russell over Facetime, he told The Guardian.

“It made my mom laugh, which has been the best,” he told the newspaper. “To see her laughing again has made it all worthwhile.”

“People are just in need of a bit of laughter,” he added. “This lifts their morale.”

After one year.. a camera that was dropped into a lake was found

To get views on Facebook.. they threw a child in water

A whale swallowed a fisherman and then spit it out!!!