Gov. Whitmer Announces Major Bridge and Road Repair Projects on I-69 in Clinton County, I-96 in Kent County Starting This Week

LANSING, Mich. -- Governor Whitmer today announced that major bridge and road repair projects are expected to begin this week. The projects include repairing the Airport Road bridge over I-69 in Clinton County, repairing I-96 near M-6 in Kent County, and a new ramp and interchange connector coming to I-96 and M-21 (Fulton Street) in Kent County. Based on economic modeling, these investments are expected to directly and indirectly support 1,169 jobs.

“Across Michigan, we are fixing the damn roads to save motorists time and money. Investments like these in Clinton and Kent counties will ensure that drivers can go to work, drop their kids off at school, or run errands safely,” said Governor Whitmer. “These projects will improve ride quality, reduce congestion, and extend the service life of this critical roadway. This year, Michiganders will see more orange barrels and cones than ever before as we move forward at record pace to fix roads and bridges across Michigan. Since I took office, we’ve repaired, rebuilt, or replaced over 13,000 lane miles of road and 900 bridges, supporting nearly 82,000 jobs. And both my Rebuilding Michigan Plan and the recently enacted Building Michigan Together Plan will turbocharge our efforts to fix our roads with the right mix and materials, making them much less susceptible to our notorious pothole seasons, all without raising taxes by a cent.”

Repairing I-96 near M-6 in Kent County

The Michigan Department of Transportation (MDOT) is investing approximately $15 million to rebuild more than 2 miles of eastbound and westbound I-96 between Thornapple River Drive and Whitneyville Avenue in Cascade Township. Based on economic modeling, this investment is expected to directly and indirectly support 191 jobs.

MDOT is investing approximately $4 million to build a new eastbound M-21 ramp to eastbound I-96 and build an interchange connection lane on eastbound I-96 from M-21 to Cascade Road. Based on economic modeling, this investment is expected to directly and indirectly support 51 jobs.

On Thursday, MDOT will close the Airport Road bridge over I-69 for repairs. This work is part of the I-69 project from Airport Road to the I-96/I-69 interchange in Clinton and Eaton counties. MDOT is investing approximately $73 million to rebuild more than 5 miles of I-69 between the I-96/I-69 interchange and Airport Road, including rebuilding the interchanges at Francis and Airport roads and performing preventive maintenance and repairs on 13 bridges. The majority of work for this project is taking place in 2021-2022, with additional bridge work scheduled in 2023. Based on economic modeling, this investment is expected to directly and indirectly support 927 jobs.

Funding for this project is made possible by Gov. Gretchen Whitmer's Rebuilding Michigan program to rebuild the state highways and bridges that are critical to the state's economy and carry the most traffic. The investment strategy is aimed at fixes that result in longer useful lives and improves the condition of the state's infrastructure. 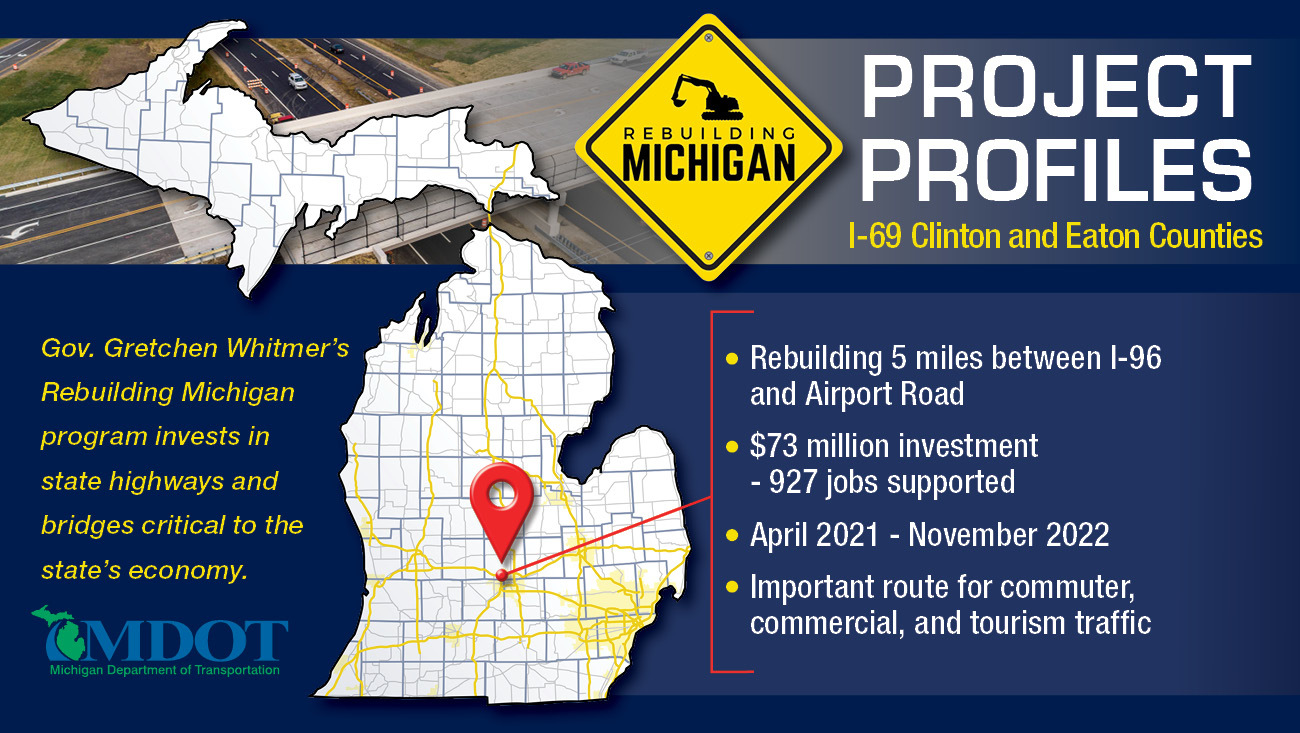 Since Governor Whitmer took office, Michigan has repaired, rebuilt, or replaced 13,198 lane miles of road and 903 bridges, supporting nearly 82,000 jobs. Recently, Governor Whitmer signed the Building Michigan Together Plan, a bipartisan plan to invest nearly $5 billion in Michigan’s infrastructure, grow the economy, create jobs, and benefit families in every region of the state. The Building Michigan Together Plan calls for critical investments of $645 million in Michigan’s infrastructure, including $317 million for road and bridge programs, benefitting both state and local projects.

Woman run over by pedal bar in Downtown Detroit

Gov. Whitmer Statement on President’s Support to Temporarily Pause the Federal Gas Tax to Save Michiganders Money at the Pump

No Trucks on Eagle Street in Dearborn

Baghdad: There is no evidence of the execution of Iraqi migrants at the Polish border

Globally, monkeypox infections are increasing, and this is what the WHO has stated